skip to main | skip to sidebar

What Do Crop Circles Mean?

This website has been set up specifically to promote new and legitimate scientific research into the meaning and intent of modern crop pictures. It is authored by "Charles Reed", a well known crop picture analyst from the seasons 2004 to 2008, and also a professional scientist: trained in applied physics, but specializing in coding.

Introduction
After a long period of confusion (or even disinformation) during the 1990's, it slowly became clear from the year 2000 onward, that modern crop pictures represent a preliminary form of contact between benevolent extra-terrestrials much like ourselves, and the common people of Earth.

Their intent seems to be as follows: most humans on our planet will be in trouble soon (whether financial, environmental or geological), and they intend to intervene, somewhat like an Interstellar Peace Corps. Indeed, they told us in no uncertain terms back in 2002: "Much pain but still time". Yet they added also as a message of hope: "Believe: there is good out there".

Most of our governmental or financial leaders---the ones who brought us the Iraq War and the 2008 financial crash---do not want that to happen, because then they will no longer be "in charge". Just as for those Burmese dictators who tried to keep International Peace Corps workers out of their little country, because they feared that they would lose an elitist kind of power, so our world leaders seem to be repeating such behaviour on a much larger scale.

Contacts also in the past?

Furthermore, this is not the first time we have been visited by that particular group of extra-terrestrials. Their field pictures often show symbols from our distant past: sometimes from ancient Egypt, sometimes from the ancient British Isles, or more commonly from ancient central America. In fact, the great surge of civilization that occurred in central America 2000 years ago may now be attributed with high probability to an earlier visit by that same group. The Olmecs or Mayans called their leader "Kulkulcan", while the Aztecs called him "Quetzalcoatl". With his help, they built the great city of Teotihuacan with its Pyramid of the Sun, Pyramid of the Moon, and Feathered Serpent Pyramid. Now close to the end of their Long Count calendar in 2012 AD, it seems as if he will return once again.

Gestures of friendship to Earth scientists

They have also made several overtures of friendship to other Earth scientists like themselves, as shown by three examples given below. First in the summer of 2000, they carved out a spectacular "bar magnet" picture, in honour of a visit to Wiltshire by NASA scientist Alan Holt: 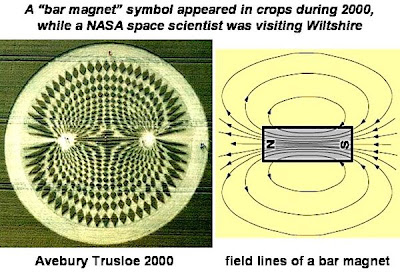 Then in the summer of 2002, they carved out a spectacular "curved DNA" picture, to coincide with a meeting of DNA-chromosome specialists nearby in Cambridge: 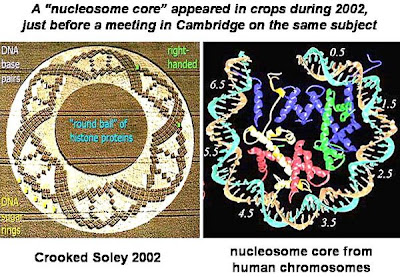 More recently in the summer of 2008, they carved out an "eight-fold symmetric magnetic field" picture, to coincide with successful testing of an eight-magnet ATLAS detector at the Large Hadron Collider in CERN: 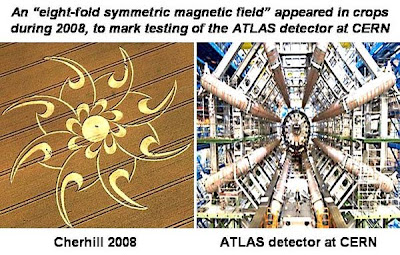 There is essentially zero chance that any of those high-level scientific pictures could have been made by local human fakers with ropes and boards, as they sometimes tell you in the newspapers or on TV. You have simply been lied to. Why? Because it is not in the self-interest of those governmental or financial leaders for you to know the truth! Does everyone understand now? For a more complete account of modern crop pictures and what they mean, please proceed to the long review posted below.
Notes
(1) For ordinary readers: none of the many beautiful images produced by those extra-terrestrials are subject to copyright restrictions, because they are not made by human artists from Earth. Nor are any images from this website subject to copyright restrictions, because of our non-profit scientific intent.Yet the aerial photography of such images may be subject to copyright restrictions, because those images are often used for calendars or postcards, to help promote awareness of the phenomenon. If after reading this website, you would like to support the aerial photography of new crop pictures in the years 2009 to 2012, please go to the websites of any photographers listed, and purchase some of their products at your discretion?
(2) For scientists: please try to wake up! This is one of the most important scientific phenomena for the past 2000 years, and you have not been told the truth. How often do newspaper people get it right? Go and find out for yourselves!
(3) For journalists: enough is enough. We only have four years left until the end of 2012. Our worldwide financial system is crashing. We are conducting useless wars for oil or power, rather than focussing on social or environmental problems. Yet still you continue to mislead the public! Please try to find a little integrity in your profession: especially the BBC, who once had a great journalist in Charles Wheeler, but now command little to no respect, because they no longer tell truth.
(4) For intelligence agencies: your analysts have misled you. By continually debunking modern crop pictures, and by giving payola to certain researchers in exchange for their telling lies to the media, or for making (poorly constructed) fake crop pictures, you have been supporting the wrong extra-terrestrial faction. The alien greys do not have our long-term human interests at heart. Probably they would prefer that we go extinct. Please try to reconsider and act rightly as soon as possible? Think of the welfare of your own children, say by 2050, even if you do not care about human beings in other countries. What kind of world will you leave them?
Posted by Charles Reed at 11:35 PM